This page is about the AND Cell from Project Red. For other uses, see AND Cell.

If the mod MineChem is installed, then you can decompose the AND Cell with the Chemical Decomposer into specific chemical compounds of MineChem. 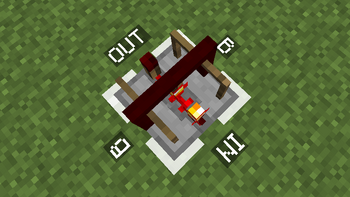 For an easier usage, NEI and WAILA could be installed, which show the input and output sides of the AND Cell.

The AND Cell has one input, one output and two B-sides for red alloy cables, redstone, an adjacent circuit, machine, lamp or anything that can be controlled with redstone signals.

Redstone signals are transmitted between the B-sides (B-line) like a bridge in both directions.